I am not expecting a grandchild…I’m expecting TWO!  I am a bit overwhelmed at the moment. I feel kind of torn.  All I can say is, the 2nd one will probably be here two to three weeks after the first one and I have massive planning to do…I was almost to a point where I could plan around one–but two that close together? Oh boy…I always said if it’s weird or unusual it will happen around here when I’m around…

I can get to the front of the checkout line at Wal~Mart and the power will go dead–among other things.  Can someone send me a bottle of  Hendrick’s Gin? I could really use a few mixed drinks about now…I know this much–better those girls than moi! Now I’ve got to figure out the Holidays every year all over again–and it’s going to be weird…

Then I hear the youngest really leaning toward naming his son AFTER another family member. To me this is a big no-no. I don’t go for that.  It’s just a thing with me that it seems rather silly to give a child a name they’d have to live up to–or one he or she would end up changing as an adult because he/she hates how it sounds–or he/she simply didn’t like the story behind it…  A child’s name is to be something taken very seriously. It is something they will own, and the responsibility should not be taken lightly.

I held my babies for a bit before I could even begin to come up with a name.  Then when I did, it just felt right. Sure I pondered several but the names REALLY came to me when I held them…It was the most awesome feeling to look into the child’s eyes and know I picked the right name, even though my middle son doesn’t like the meaning of his.  Oh well…Such is life. He can get over it.

Picking names for a baby is not that hard, but some people make it a chore.  I think my way is the better one.  I never needed a baby name book either…. 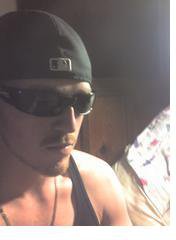 This is my son Kevin–in one of his quieter moments!

We are about to watch the month of May 2012 flow gracefully (or not so gracefully) into History.  There has been some much-needed rain out here and I hope we get more, but here is what is going down.

I am moving into a new house.  My son Kevin and his girlfriend Daphne are moving into a bigger house since the baby will be here before we know it.  My son, since he can’t work has stayed up at night playing video games–which can be quite entertaining if someone ever gag tapes him and puts that on YouTube in order to teach him a lesson or two!

If anyone wants to see that boy pop a gasket, just wait for some idiot with a Nazi flag to show up in the game and he will emit a list of vernacular phrases so long that it will make some of the drill sergeants I’ve seen look like choir boys! All I can say is that I sincerely hope that the baby doesn’t get kicked out of day care by the time he’s 18 months old due to the broad vocabulary he might hear from my son after his birth because if that happens, Daphne will kill Kevin!

For now it’s almost funny but the more I think on it–I seriously hope Kevin calms down when he’s gaming for the sake of the baby! I told Daphne to look at the bright side of things. If he’s already going to be up at night–then he can help take care of the baby…However changing a diaper might pose a problem since he suffers from Game Controller Hand Lock Syndrome!  He won’t be able to release the game controller!  In fact, if Daphne has to kill him it may have to pried from his cold, dead hands!  😉

Deep down though,  I hope that I can be half the grandmother figure in my grandson’s  life that my Grannie Ainsworth was in mine.  Barring my cooking skills, or should I say the lack thereof, I think that my cookies will past muster with the little guy when he’s older. However, I’ll never be able to make tea cakes like she did…Kevin and I were discussing this over Mother’s Day dinner.  He can definitely cook, so he did not get that skill  from yours truly, that’s for sure!  He might have gotten that knack from Grannie! That gives me hope that my grandson will inherit that same gift and thus be able to survive!   Anyway, have a great week!

I was called Fallen.  I am the one you don’t see or hear.  I stood by you when you cried, and told you all would be well.  Yet you chose to simply let me fall.  I was crushed and broken, but you were no longer there. You built your own Utopia while I faithfully stood and waited.  Silently…Hoping for some sign that my fears had not come to pass.  Then the rain fell.  As each drop penetrated my being, I longed to be part of Mother Earth once again–to have that oneness with something again, for walking on this red road has become increasingly difficult.

At least if I am part of Mother Earth, at some point we will cross paths again and I will feel your warm presence–though you will not know mine for I will be supporting your footsteps as I always have. However, the Great Spirit has other plans for me.  I will one day leave this place behind, and the grief I have with it.  As the rain washes the tears from my fading tracks, you will come to look for me but I will be gone–as well as my tracks.  And when you seek the Great Spirit to return me to you, you will find that he has sent me to where I am truly needed…

And at that point I will no longer be fallen or forgotten. I will be appreciated, needed and loved.  I have a purpose yet to fulfill in this life and will not let you drive me to such depths of despair again–let alone distract me from what I must do ever again.  Farewell, for soon you will be fallen and forgotten as my purpose on this road unfolds before me.  Even now you seek me, but I am not to be found…Please do not ask  about me or for me again. I will no longer answer for the ship I am going to leave on is waiting. I shall not look back because I have now risen.  Of the two of us, I shall now fly to my new sanctuary. Peace.