In 1962, Sophia Loren won the Best Actress Oscar in “Two Women”…In 1965, “Shelley Winters” took home the Oscar for Best Supporting Actress for her role in “A Patch of Blue“.  Both movies were tackling issues that a lot of writers will not touch on any longer–or if they do, they do something stupid when writing it (and/or putting the cast together–like they did with “The Women” in 2008) and it crashes on the remake. Both “Two Women” and “A Patch of Blue” were somewhat ahead of their time, I think, but were important to film history itself.

This movie rivets viewers even 52 years after it’s release… 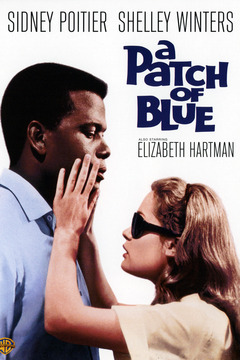 One of the most important films of the era, “A Patch of Blue” tackles racism, abuse, alcoholism in such a way it made one think back then. This film was definitely ahead of its time in many respects. It was well before the on air kiss of Captain Kirk and Uhura on “Star Trek, too…No they don’t kiss here, but it’s obvious that these characters had some type of feelings toward each other.

I feel the same way about “Chariots of Fire”.  The reason that movie has  had so much staying power over 30 years time is that there is a universal issue it tackles that has absolutely nothing to do with religious faith of some sort, but more to the point of being true to one’s self despite what society tries to dictate.  In short,  Eric Liddel and Harold Abrahams had huge sets of cojones and did not compromise on what they stood for, period.

Ben Cross and Ian Charleson portrayed them well.  It took equal amounts of cojones to even take the parts given what society says of that sort of thing now. After reading what Ben Cross did to prepare for that role, I am convinced that he and Charleson are the other two reasons that movie will have staying power for another 30 years in film history.  Argue with me all you want, but you won’t change my mind or the minds of the fans who watch these types of films again and again. The themes are timeless and universal–and that is what is severely lacking in what is being put out today in Hollywood, so they try to remake EVERYTHING.  They need to get back to some original thought and scrap the damned remakes altogether–especially when it comes to classic movies like these.

Instead of tossing us bones like they would to a dog, Hollywood needs to start putting some meat out there–and NO I’M NOT talking about eye candy…I’m talking about using seasoned actors and actresses that can REALLY ACT.  It doesn’t matter if they are older–I want to be able to believe if someone is going to play a murderer, then I want that actor/actress to play said murderer well enough that I’ll believe he/she IS THE CHARACTER and is about to bolt through that screen to kill my ass!  The late Jack Palance had a knack for this–in fact he was so good, he scared a fellow cast mate once.  I believe strongly that Hollywood is going to suffer some backlash if it doesn’t stop this constant marketing to teens, ‘tweens, and those who love the bloody “chick flicks”.  Baby boomers outnumber the other audiences and they are tired of this trend, I think.  I know I definitely am.  Of the movies I’ve seen in the past year and a half, “The Help” is the best one so far.

If someone were to build competing film studios in other states that marketed to my age bracket, they would make a killing because people in those states would invest in a good film. They say non-attendance in theaters is why films are made to cater to the youthful market. That is crap in my book. If they would market to us and the entire families we have, they’d make more money.  I think that for every teen that will go to a flick, there are 3 adults that will go if the movie is worth a damn. If not, they simply leave the kids to their own devices while they use Redbox, VOD, or PPV.

There are few actors and actresses that can pull of that wonderful feat of letting that character breathe through them to the extent that it seems real.  Ben Cross, Melissa Leo, Gary Cairns II, Jessica Chastain, Dallas Bryce Howard, Glenn Close and Zachary Quinto are among that number. Just a note here:  I hated the Dark Shadows remake–totally detested it, but that kid Gulliver McGrath is going to have a good career ahead of him…Even as young as he is, he is totally believable in character.   Michele Pfeiffer also did well in that film.  They were the only good things about that fiasco.