Note: I cut loose with the vernacular in this one. You have been warned.

Alright everyone…It is with heavy heart I must make this announcement being that I rather enjoy my boring-as-hell life.  I have to become famous for something. It doesn’t matter if it is for my not-so-eloquent prose at times, or my ranting but it is something that must be done.  We all know (if you know me well) that it won’t be for my culinary skills, that’s for damned sure!

I have decided that I must be famous before I die so the Westboro Baptist (Church) Hate Group can protest my funeral and look like the total ass hats that they are. If they decide to show up at MY funeral to protest it will relieve some other family of suffering when their loved one most likely died on duty in the military or something, which is an honorable death.  It will also spare the family of some celebrity WORTHY of attention some grief if I was so vocal they decided to show up and do a piss take on my departing this “bitch of an orb”–(Beckett) ceremony.

There is only one thing I ask should this become a possibility: “I want someone–ANYONE, to show up at my mutha friggin’ funeral dressed as the grim reaper so that he/she can  put a hand on one of their shoulders and say, ‘It’s your time, Bitch!”  Hopefully they will do a good job sounding like “Job” from Banshee! That would be my ultimate prank on that lot. They can substitute any vernacular they wish with my blessing. 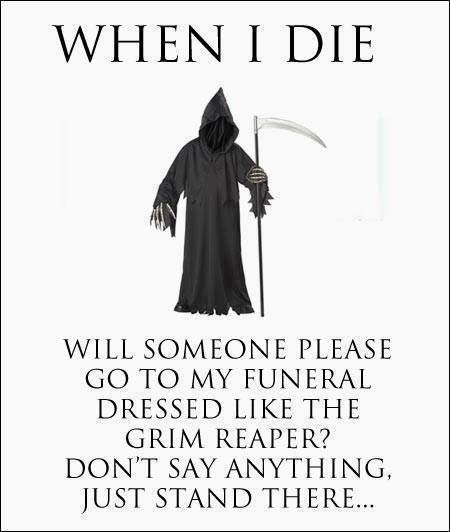 And I want someone to pull this at my funeral–just stand behind someone who gave me a lot of crap!