I originally wrote this when I first saw the movie upon its release. Thank God I didn’t by the freaking ticket. I’d have demanded a refund. To all the die-hard Deppers and Burtonites–sorry if it offends you…I am simply being honest here. That script totally sucked!

Alright people…I actually broke down and went to see this movie.  I will say this, Mr. Ebert was being kind when he gave it 2.5 stars.  Now I am going to write about what is WRONG with this film, and it shouldn’t matter whether or not the viewer saw either the original or the Revival Series prior to viewing it, but before I do, I will say this: I think that it is truly sad that while Johnny Depp is probably one of the greatest actors alive, he is wasting his talent on steering clear of a mainstream audience.  It is fine to be a rebel of sorts in Hollywood, as long as you know whatever the hell your cause is and if it is a cause worth standing ground for.

However I cannot fault Depp for his Barnabas portrayal here. In fact, aside from the clown make up which he’s been using in his past few films, he actually did attempt to give the character of Barnabas Collins a depth of sincerity but was derailed by the horrible script writing of Seth Grahame-Smith.

Each actor was given an interesting part, but due to the lack of integrity in the script, there was little to no character development with the other characters involved. It seemed that the movie was somewhat rushed after the back story about Josette, Barnabas and Angelique was given in the first 20 minutes or so.  I won’t give away the ending, but I will say that those who loved both series (the original and the Revival) will be very disappointed, if not pissed off.  Here are a few reasons why:

It is one thing to take dramatic license and add to a script. It is another thing to bastardize the entire story line just because one has bought the rights to do it.  According to the REAL story, Angelique curses Barnabas prior to Josette’s demise. The part about her bewitching Jeremiah and Josette so that THEY married was completely omitted–not to mention the fact that Barnabas’ parents were NOT killed but remained part of the story line throughout both the original series and the Revival series. He never delved into black magic himself either. Hence that is the beginning of the bastardization of the character.

PLEASE don’t try to tell me they had to rewrite it to make it pleasing to a new generation. That is such bullshit.  They could add some humor without doing the above. It ruined the credibility of the film with fans who know how the story actually went. Also I have a problem with a “witch” leading a mob to bury a vampire alive.  Angelique didn’t try to go too far out on a limb. Besides that Barnabas had killed her and she cursed him with her dying breath. Again…Credibility shot to hell. Victoria not knowing her own damned name on the train didn’t help either. THAT was stupid. Not campy.

Then after 48 minutes into the picture, I was asking myself, “Where in the bloody hell (no pun intended) is this movie going?  I mean, vampires supposedly SLEEP by day…This version of Barnabas was all over the place. I don’t want to hear anyone bitching about the Dark Shadows Revival Series day for night shots when there are plenty of them in this damned flick.  An HOUR into it, I was still wondering where the hell the story was going. The oral sex w/Julia…The sex w/Angelique…Give me a break! The latter was reminiscent of “War of the Roses“…The finale–as another reviewer stated–was reminiscent of “Death Becomes Her”…I didn’t find Eva Green‘s performance or Ms. Heathcote’s as really standing out either.

With only 40 minutes left, total disappointment…NOT in Depp’s acting–although Ben Cross beats his ass down when it comes to the part of Barnabas…Not in Ms.Pfieffer’s acting. AS I said the writing itself, the entire changed story line sucked balls. However there are some aspects of it that did appeal to me. The write-in of Victoria’s childhood did appeal to me–no spoiler. Let’s just say that psychologically, I can see how she feels connected to Collinsport–and why she likes being there–probably because that came out of some of the best fan fiction that I have ever read.  If you don’t believe that, start reading some of it…The apologetic serial killer crap doesn’t appeal to me either–again, it’s bullshit. Barnabas tried not to bring attention to himself.

I also felt a connection with David’s character–having been abandoned emotionally in more ways than one. No  spoiler there either. Only in the last 24 minutes does it seem to pick up to some sort of climactic action…Let’s just say if that first is last and the last is first, there will be no sequel…This Barnabas issue of fans wanting an ending got it…Watch it to the end and you will know why–but this was more of a spin off…Not  a spoof, despite its comedic moments.

What makes it tragic to me, is that if the writer Seth Grahame Smith had taken the FIRST movie to devote to the mystery of Vicky and tie it in that way with Angelique stalking and her connection to Josette, the rest could have come together in part 2 and kicked total ass. By the way, I did like Alice Cooper‘s appearance–even though he wasn’t famous until ’73 or ’74…

Despite the brief cameo of the original cast, this movie does not have the bite it should have had for it being part of the franchise. The entire story–minus the Josette thing at the beginning could have been dealt with in an hour on a TV production rather than this 113 minutes of wasted celluloid.  There is no excuse for the dragging ass pacing of this film for the first 89 minutes.  More could have been told and less time wasted–with more time given to character development.  It boils down to this, stellar cast…Interesting idea…Yet it was wasted on a script that was totally wrong…Hence the title of my review…Dark Shadows: Wrong and Loathing It. 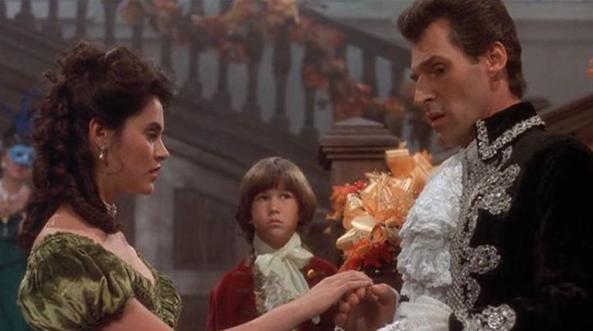 Now that Jonathan Frid is gone, Cross owns the role in my book. I’ll never go to any sequel of the 2012 version, that’s for sure…

Addendum:  I am clearing something up here by request.  Johnny Depp, while even though he was a producer of this film and bears much of  the responsibility for the fact that it tanked here, needed to learn a lesson here.  There are some parts which even the greatest actor on this planet does not have the range for and should not undertake.  This clearly was one of those roles for Johnny Depp.  If you do some checking, you will find that he did want to play Barnabas in the 1990’s to which Dan Curtis gave a resounding “NO!”  Curtis was right.   The only way to fix this now is to totally change up the story to where Angelique set this whole thing up–including the meeting between Josette and Barnabas in Martinique.

Why do I say that? Because it is the only way to save the franchise and stay true to the characters at this point in time.  Fans want a resolution to this storyline–not drag it out for another 40 years.  Frid is gone.  Cross is older now.   However, this can be redone utilizing some of the original cast members in speaking  roles–even if short ones, and some from the Revival cast.  THAT would have worked and the fans of both versions would have been much happier.  Unfortunately, the Burton-Depp camp didn’t consider the fans when making this version. This was about egos and what they thought would sell the picture: The Depp name.  What does this prove?  It proves Tom Laughlin’s point (You might remember him from the Billy Jack trilogy) that there are times that even superstar power will not sell a picture if it doesn’t meet certain expectations.

If you want to know more, read this book!  http://www.billyjack.com/Merchant2/merchant.mvc?Screen=PROD&Product_Code=BK9S&Category_Code=BOOKS&Store_Code=BERSERK

For any writer, this book is right on the money!