I guess Law Enforcement told people in the media to not talk to Billie Dunn or Shawn Adkins  until cleared of suspicion in the Hailey Dunn case.  Anyway here is a link to tonight’s chat because it left people with a bad taste in their mouths.  It left me thinking of the movie “Small Sacrifices” for some weird reason.  Chat link (recorded from earlier) is included here:

I would still like to know WHY she called in if she knew the nature of the program.  Shawn Adkins was supposed to be on it.  What keeps drawing those two to come back to the program given Adkins’ earlier statements?  They get grilled, and they hang up the phone every single time only to call back–and sometimes are heard muttering an expletive or two before hanging up…Are they gluttons for punishment or what?  Don’t they have a lawyer, and IF they do, why isn’t he or she telling them to keep their mouths shut?   I am willing to  bet that Diane Downs wishes that she did.

I suppose only they can answer those questions, but Mr. Peter Hyatt (who you will hear speaking) is analyzing her statements.  Maybe the fact that she keeps showing up, as does Adkins is what is making me think of the movie.  It is as if the more  the finger is pointing at them, the more Billie  puts herself out there.  If I were her, I would have already retained an attorney.

I think the focus needs to go back to finding the child and on what Clint Dunn has to say since he puts himself out there, at his own expense in search of this daughter.  He also has no problem confronting the tougher questions–the “whys” since he’s probably asking himself those same things.  To me, it doesn’t matter what happened yesterday as much as what I see now.  This man has gone through some inner changes.   He now has focus and a purpose–very much like John Walsh and Paul Klaas.  Hopefully, Hailey will be brought home safely.

There is no love greater than the love of a parent for a child–so I really hope people  are wrong about Billie Dunn, but it is getting harder and harder to keep an open mind now.  I can see why both sides feel as they do.  One voice is telling us not to pass judgment until we have all the facts and/or Hailey is home again.  Then there is that other, more ominous voice that within that loudly resonates from the shoulders of many people in this country like a horned red devil  that says, “She’s dead. Someone’s gotta pay.”  Face it–we all know it’s what most think.  However, Elizabeth Smart was brought home safely and so was Jaycee Dugard, so there is always hope.

This particular chat with Billie Dunn was disturbing in other ways besides tone and demeanor.  Billie was accused of misleading one of the hosts, but where?  What did she say? I do not see that this was so clear.   Better yet, why was Hyatt making a big fuss about whether she ‘watched the ball drop’ on New Year’s Eve?  Yes, I can see the evasiveness of her answer:  “I was watching the news.”  So what?  They may have shown clips of it drop on New Year‘s Eve, so why couldn’t she have watched the news AND saw the pre-recording of the ball dropping while watching the news?  Without evidence, they cannot just go in and lock anyone up. Opinions do not = evidence.  One can listen to the chat from the link above and get a good sense of the division that rocks the community and the country, and that is reality–not conjecture.

Now this leads me to my last question…Who or WHAT  is making the real brownie points off of this story besides the media?  The people and community remain divided.  Armchair experts burn up keyboards all over the country telling people what they should think about this case.  God forbid you disagree with them or they want YOU to play detective to prove YOUR opinions as fact, when they are merely that–opinions (aka more conjecture).  If someone wants to do that, get them to do their own homework.  A writer doesn’t have to “prove” and opinion or theory.   Now if spewing something as fact, that is a different story. For all I know, if there ever IS a trial, there may have to be a change of venue all the way to Bulgaria because of the way the American press is butchering the facts of the case.

What are the facts?  I can list those quickly:

ONE–Hailey Dunn is and has been missing since December.

TWO–law enforcement should have went ahead with this as an abduction to be on the safe side.  4 days is too long.  It should be mandatory to treat ALL juvenile disappearances as possible foul play so that the chances are better of finding the child in question.

THREE–Porn is found on a computer that several people had access to including Adkins at HIS mother’s house.  The memory stick may have been in the Dunn household, but it could have been his and not hers.  Possession is 9/10 of the law and that is true, but proving actual ownership has to be done by tracking down credit card transactions and IP addresses and/or getting a warrant for a list of subscribers to the website.

FOUR:  They are no closer to finding Hailey or the “why” of her disappearance than they were at the end of December because of all the rumors and conjecture flying about.  Until she is found, there can be no “how” or “why” explained in a logical way.

Until Hailey is home–everything is conjecture and the media always scores.  The last thing we should be on is a witch-hunt.  Jaycee Dugard’s stepdad was suspected in her vanishing and he was totally innocent.  I remember a lot of people pointing at the father of Elizabeth Smart as well. People can always be wrong.  I struggle with which side to believe every time I listen to the playbacks.  I am not going to point fingers because it is not in my nature.  However, I will wait and see what transpires next.   At this point, it is all we can do is wait and watch as things unfold.  Hopefully, Hailey’s family members will not  have to wait as long as Jaycee Dugard’s family had to.

Am I the only one having conflicting feelings on this case?   Listen to the chat and tell me what you think.  Am I seeing something that may not be there in the behaviors Dunn and Adkins show?  Better yet, why are these chats, the YouTube clips and the Nancy Grace clips triggering my thoughts of Diane Downs?  Am I missing something here?  Like everyone else, I will probably be able to answer those questions later in time.  However, I am not going to listen to either of those “inner voices” arguing too much.  To do so would serve little purpose until more facts are in. 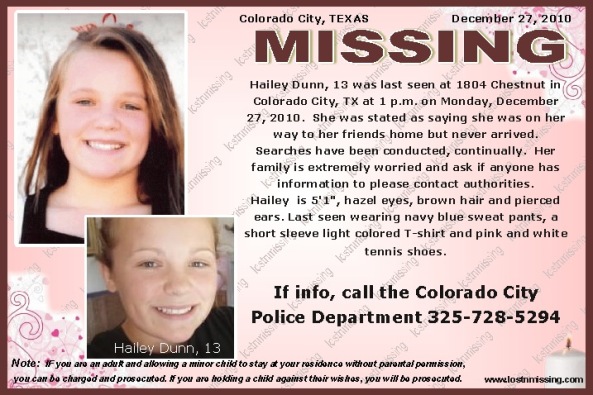