I remember being herded into the library with all the other youngsters in 1969…The TV was brought in…There were no flourescent lights back then…No central air or heat–just those swamp coolers–or, as most other people call them, evaporative coolers. In fact, I never saw flourescent lighting until my father got stationed at Offut AFB in Nebraska in 1971.  I also remember hating them because my eyes were sensitive.

Anyway, I remember the wooden shelves in the library that held all the treasures I loved rummaging through–the books…The books were my world even at this age…School had not started quite yet, but I remember that a lot of us were gathered in there with adults–and the TV’s were in black and white…Not color…I can still hear the squeaking wheels of the audio-visual cart that it was brought in on and can hear the sound of the static in my mind…

It was hot, but I was okay…We were given cookies and Kool-Aid…And I made sure I got my favorite that day–cherry.  I had already eaten my lunch–which back in those days consisted of huge rolls that were made from scratch, salad and whatever the main entrée was–and on this day it was spaghetti…I ate everything on my plate because one of the aides told me if I didn’t do so, then I wouldn’t get to watch TV in the library with everyone else–and I hated salad back then unless my mom made it.  Mom always knew how to make stuff the right way! And she still does…Too bad I didn’t inherit my unique culinary skills  from her, my grandmothers OR EVEN my father…

My household and the human race has been saved thanks to the fact we have TV dinners and we can eat out since I tend to screw up something at least twice a week.

Anyway, as I was saying, we all were herded into the library.  I ate my cookies, drank my Kool-Aid and sat in a chair close to the front of the class.  I did sneak a book in because I was bored, but the teacher said it was alright when she saw it because they were having problems with the TV.

For once, I read quietly as the others got restless and were called down one by one.  I think my mom was amazed I didn’t get into trouble for once. I had a knack for ticking off teachers and irritating them–sort of like Simon Burch with those questions adults hated to get…Like:  “Well if you know smoking is bad for you why do it?” to a teacher by the lounge once when I caught her red-handed…She just looked at me and said, “Tina…This is a bad habit and don’t ever start it!”

I quietly went back to class.  All the while I was pondering another thought: “If Santa is not real, then how did I get those toys and goodies last year?”  Yeah…She said Santa was fake to another student and I heard her. We told our parents and all hell broke loose the next day, but the damage was already done. I don’t think my parents said other than that, “She’s wrong. Ignore that.” but the other kid’s parents caused a problem so she did apologize to us both.

As we all were waiting, they had trouble getting the TV to work, so one teacher started with that teapot song…I didn’t do that one…Never liked it…She called me a sourpuss and I simply said, ” I won’t do it. It’s for little kids and it’s stupid.”  I then got put in the corner for a bit–until Rusty threw a spit wad and hit one of them in the butt.  After that I was forgiven!  He got swats.

Then came a lady who was singing “Yellow Submarine”…I knew that song and I liked it…Then again, I raided my sister’s Beatles’ collection on a regular basis–along with her Elvis and Beach Boys records…AND a lot of others too–Jerry Lee Lewis, Credence Clearwater Revival and–as age appropriate as one can get–The Monkees…I have you know I was really sad to lose Davy Jones this year…He was the big brother I never had but always wanted since my brother James used to bug the crap out of me all the time back then.  I think to a kid my age in 1969, Davy was kid-like and always happy and that’s why a lot of us liked him so much–and (NEWSFLASH) some of us loved Mickey Dolenz for the same reason!

I don’t know if those guys knew how many kids from dysfunctional families they enabled to smile and laugh, and I wonder if the surviving members will ever know…However there were a lot of us that were able to escape some things by watching that show…If  those guys had shown up on Sesame Street or the Electric Company–we’d have all been in Heaven in class!

As we all gathered around several minutes later, it FINALLY came on.   I couldn’t remember the words used, but I remember the flag being put on the surface of the moon and the astronauts “bouncing” around.  After that, I went back to reading.  As a child, I didn’t ponder the significance of the moment in History or the future it would lead to…I just knew the teachers thought it was important that we all be brought to the school to see this.

A few years later, I realized how important it is…And NOW–49 years later, we are seeing pictures taken from the surface of Mars and sent back to Earth…Like these two:

This is a view of Earth, Jupiter and Venus from the surface of Mars.

It almost looks as though one could walk on the ground and look up at the sky doesn’t it?  I am in awe of it…Here is another one: 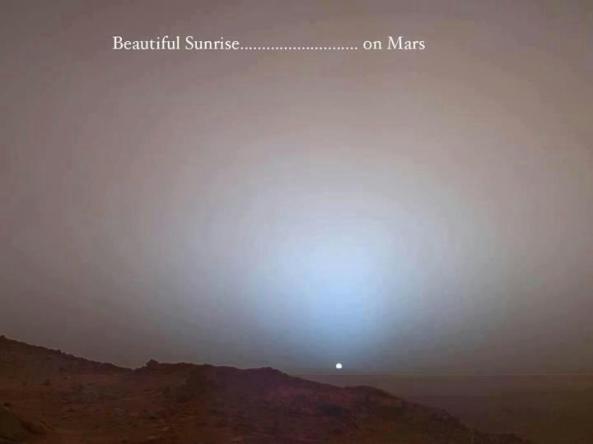 This one is self-explanatory…

You know…I think if we could colonize it and survive, I’d move there…However, we probably couldn’t survive without building artificial means of producing an enclosed, renewable atmosphere that would meet our needs…In other words, we’d end up living in space stations of some sort. The planet’s surface and atmosphere are too hostile to sustain any life form…Then there are those damned solar winds they talk about and the high levels of radiation…I certainly never thought I’d see even  THIS much in my lifetime…Did you?  It makes me wonder what my grandson will get to experience in his life.  For those of you not born in 1969, you missed a huge point in History–but do you realize how big this one is? I do…