Okay…Here’s the latest! I went to the baby shower for my first grandson who should make his début kicking and screaming sometime next month.  I say that because if he is anything like Kevin Sr., we’re in for a ride, that’s for sure…Kevin (MY SON) had a set of lungs on him that could have been classified as ear-splitting wmd’s and hopefully my grandsons will have those too! I can handle that noise but I can’t say the same about people who like to honk their horns when I’m trying to SLEEP…

I already gave both grandsons “the lecture” too.  “Don’t be a corrections officer.  Go to College. DO something with your life.” and that was it.  I didn’t add the “…if you don’t go to college.” bit at the end of that.  I guess I should have…Well, they’ll get another lecture anyway.

I find myself remembering when I had my 3 sons.  Eric is a first time dad and Laura is a first time mom…The first time the kid sleeps all night, they’ll both be up checking to see if the little guy is breathing.  I think we ALL go through that when they sleep all night at first. Then there are those growth spurts (if either of them nurse) where the baby will want to eat every 30 mins for a week or so, and it will drive ’em mad because they’ll think the baby’s not getting enough milk, when he is…He just eats more often during a growth spurt.  In case some of these anti-breast feeding nurses end up coming at you, remember one thing:  get as much of the areola into the baby’s mouth as you can.  That way you don’t get sore nipples. Yes, those nurses are still out there and they don’t want to let me hear their BS about why formula is better either.

Hopefully, neither of the girls will go through the postpartum depression crap.   It does exist and Tom Cruise is a total idiot for trying to act like he knows something about it when he doesn’t know jack.  He’s not a doctor and if there is one thing that makes me mad it’s when someone tries to play “armchair expert” at something they have NO experience with.  He hasn’t lived those remarks to Brooke Shields down yet, either.

I had postpartum depression with Eric so I KNOW it’s real and I wish it on NOBODY.  I would cry and cry thinking that I had to be doing something wrong. At one point, except to feed Eric and change his diaper and such, I stayed in bed for 2 days straight. Found out later what caused Eric’s crying for hours was severe colic.  Dad stepped in several times during that point because I went through it for about 4 months until my hormonal imbalance (which creeped up on me) was straightened out. I wouldn’t eat for 2 days or so (something my sister didn’t know about but Dad did), and at other times I’d totally zone out. My dad and I became close again after I had my kids, and I am grateful that in hindsight, I can see that he knew what to do!  He had me tell my doctor when he took me to the base one day. When they did the blood-work, my hormone levels after 2 weeks were still all jacked around at levels that resulted in my getting more blood-work each month.  Ironically, I didn’t go through it with Brian or Kevin.

Either way that shit is real and anyone who says it doesn’t exist has his/her head up their fanny. It’s that simple. I hope if either girl goes through that they’ll get in touch with me or their mom…Why? Because most men just don’t get it. Seriously! Kevin would be so freaked out if Daphne went through it he’d be beside himself.  That’s the NEXT discussion I’m having with him by the way. He needs to know what to watch for.  To be honest, I didn’t realize I had it–I just thought I was losing my marbles and doing everything wrong.  No matter how reassuring Dad was and such–I could not pull myself up by the bra straps and get my head out of my fanny either, so the doctors were really cool about addressing it.  My main one told me that once my hormone levels went back to normal I’d be fine and it sometimes takes more than 2-3 months…Well, that’s what happened, but it actually took 4 months with me.  Going back to work helped some, but I wore my mask well.  I didn’t let it show, but Dad knew…Seriously…Couldn’t hide shit from the man…

There is just something about that father-daughter bond that never goes away regardless of what goes down…I miss that guy…AGAIN.  I’m sure he’s laughing because all the weird stuff happens with me…When I had Kevin, he called to tell my niece had been born. Her name is Chelsea…I went to the bathroom, sat on the toilet and my water broke. I called him back and said, “Well Dad, your grandson is on his way!”  He laughed so hard and said, “Well the strange stuff always happens with you.”  I wasn’t about to disagree because the pattern never changed. Seriously…I mean look at this chapter of my life–Nana getting the double whammy–TWO grandsons that will be about 2-3 weeks apart! How often does that happen? Better yet, what are the odds of  moms having kids on their birthdays? I’ve done that too!

By the time Eric was 4 months old, and under the docs care, I was back to normal.  Thank you Dad…At least the girls know if they need a breather, I’ll have a twin stroller and a crib at the house.  First thing’s first. I’m buying a big refrigerator. Something tells me I’m gonna need it–just like SOMETHING told me not to go to China when the opportunity came up.

Well I am SERIOUSLY hoping for some rain today. We certainly need it!  Have a great week everyone and enjoy this pick of Daphne and the best creative work I have seen from a teenager! Gives you an idea of what name they are considering for Grandson #1 (said in Charlie Chan voice)! 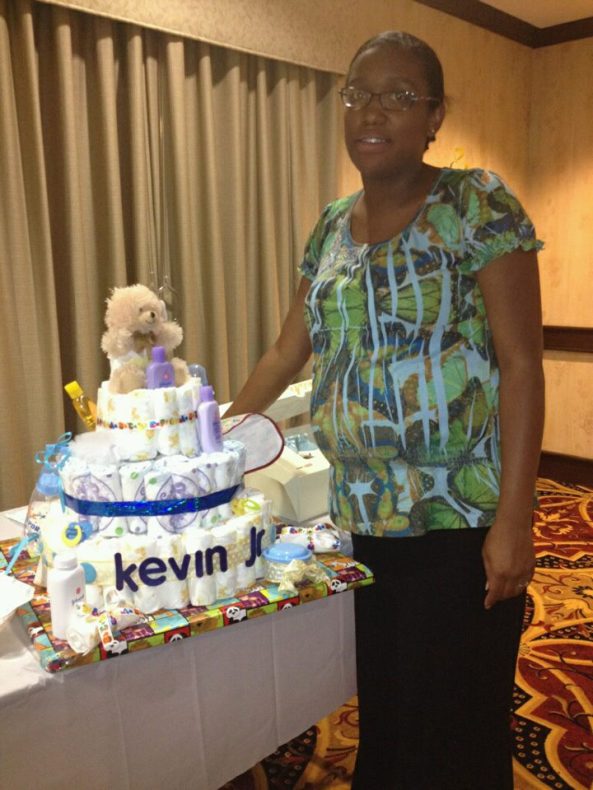 There were tons of gifts inside of this thing! The girl who made this should market these! They are great! Those are rolled up disposable diapers set in tiers and the compartment inside holds a LOT of stuff! This is my favorite pic from the baby shower! LOVE YA Daphne!