I so totally dare anyone to caption this thing! I get the weirdest stuff on Facebook! I’ve never seen rabbits eat this before!  My question is, will they get munchies afterward?

NOTE:  This was written for fun.  Given that fact, feel free to add your thoughts on it, but this is not meant to make those in academia happy–it is meant purely just to have some sort of amusement about this topic.

The “Bonehead”…This is the type of villain that will steal, lie and cheat and is mainly used as a buffoon or comic relief–like John Astin in “Evil Roy Slade”  or Kirk Douglas in ‘The Villain”.  These are ones that are so bumbling you grow to like them…They just can’t get their stuff right!

The “Asshat”–This is one of those guys that’s like the drill sergeant  “Full Metal Jacket”.  These guys don’t know when to back off even though they are well intended (as in doing their job) and if something bad happens, the hero takes an instant dislike to him/her–and sometimes the viewers are glad if something happens to those characters–like jail time, demotions or even death just because they are such asshats! They either overdo it in the “zealous” faction or they don’t know how to do their job in a way that can benefit other characters. The Coach in “The Breakfast Club” can qualify here–and to me he IS an asshat! He definitely didn’t know how to “teach”. If this “coach” had handled up on these kids this way now, he’d have been put on probation himself. He did mistreat Bender in my book.

The “Conniving Bitch”: –I’ll use movie examples here:  Dame Judith Anderson in “Rebecca”, Bette Davis in “Whatever Happened to Baby Jane” or “Jezabel”…Take your pick.  How about Glenn Close in “Fatal Attraction?  Mo’Nique in “Precious”?  Their levels of evil qualify them here–and I had little to NO empathy for them. The same falls true for Farah Fawcett in “Small Sacrifices” and Elizabeth Montgomery’s role in the movie “Amos”.

The Jealous Wench:  This is actually ranked right below the “Conniving Bitch”…Just look at Jane Fonda in “Monster in Law“.  Some are a cross between this ranking and the “C.B”–and a good example of this lies in Angelique Bouchard–from the original  “Dark Shadows” or the “Dark Shadows Revival” series.  I didn’t care for Eva Green in the role. I felt that the script for that flick made no sense anyway. It was like watching “Occupy Collinwood”.  If Angelique controlled Collinwood, what the heck did she need Barnabas for? She didn’t. Trying to make her a bit empathetic at the end was a huge mistake. She’s a sociopath as she was portrayed in both the original series and in the ’91 series–sort of like Glenn Close in “Fatal Attraction” and with almost a similar narcissistic quality. In fact, in the original series she stooped to killing her own sister.

The Ones We LOVE to Loathe:  Let’s see…This should be easy because it is definitely like “beauty”–in the eye of the beholder in a sense because these villains wire people up…  J. R. Ewing from “Dallas”.  Not that any of them are saints on “Sons of Anarchy” but Gemma Teller Morrow (Katie Sagal) takes the freaking cake…She plays several sides of a fence…Seriously.  Then there is Robert  Mitchum’s character in “The Night of the Hunter“?  That movie kept us on the edge of our seats. Check out this recent review! Very well done:

The same thing goes for two on the show “Banshee”…There are several “villains” there because most are not upstanding, law-abiding citizens, that’s for sure.  Two of the best villains on here are Rabbit (Ben Cross) and Kai Proctor (Ulrich Thompson).  Even the main characters are villains (Lucas Hood and Ana/Cassie Hopewell)–and it gives new meaning to an old bible verse about “…not one being righteous”  in that town, too.   However,  viewers are going to have empathy for some and total loathing for others and my bet for the honor of this particular title  is on these two characters–Kai Proctor and Rabbit.  Both have some bad ass underlings.

Ulrich Thomsen as “Kai Proctor” on Banshee in the above photo.

However it is hard to classify Ana/Cassie, Lucas Hood or Job as true villains when they are on the run from Rabbit and his lot and have led (for the most part) “quiet” (I am joking here!) lives for 15 years–while Lucas was locked up. It is very  hard to say that Lucas is “quiet” because he did kill some folks.  Again, hard to classify him and Ana.  However I am tempted to put Ana in the “conniving bitch” category because of how she treated her father–Rabbit and lied about who she really is to her hubby.  There is something up with that because he did love his daughter. This is where some will actually empathize with Rabbit.  However others will be baffled as to why Lucas even bothers with her because she really pulls some wicked crap that he should have grown a pair and killed her over in my book. Ah…The joys of true love. What can I say?  I mean, she cuffed him to a bed and left him for Rabbit, for Chrissake! I can say this, he is correct when he tells her that “Carrie” (as in her identity) is a “hiding place”. 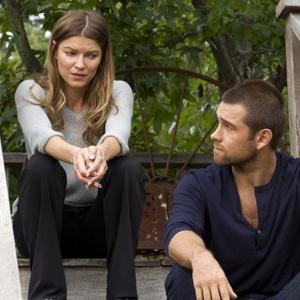 Some do feel a bit of empathy for Rabbit when a couple of things get revealed–but he’s still gonna be one twisted, sick–well, you get it.  It’s also easy to empathize with Kai over the issues with his father and his upbringing–and that is where it ends with him.  He’s almost as twisted as Rabbit, I think, but in a different way. No, I take it back. Rabbit is NOT as twisted. Watch the scenes Proctor has with his niece and you will know why I say that…

The pic above is a screen shot of Ben Cross as “Rabbit”.

If you have not seen “Banshee” I highly recommend it! It is very well-written and directed,  but it is NOT a family show. There is nudity and such–after all it is Cinemax, so use your brains and put the kiddies to bed first or send ’em to Grandma’s!  After you watch that, come back and tell me which character (NOT CAST MEMBER) you want to kick in the shins! Just remember! Those men and women are ACTING!  It’s the characters we loathe–not the players!   I wonder if Mo’Nique got flak for her role in “Precious” now that I think about it…

I don’t know about the rest of you but when villains fall in the last category above, it just totally rocks! People  LOVE hating villains like these!  I am going to go a little further here.  I think the character of “Mr. Rabbit” is going to be so detested by some that he’ll end up being one of the best TV villains of all time–which would dethrone J.R. Ewing–and believe me, this guy makes J.R. look like a cub scout in comparison!

To give you an idea of how twisted the family tree is–here is one card Carrie/Ana will NEVER send to her father Rabbit–even though there might be a little truth in it:

And I am going to add here that since “Banshee” is the highest rated show Cinemax has ever aired, I think some prime time Emmy nods will come out of this–and if not, someone hasn’t got their head on straight.  This series has some excellent writing in it–so even if you’re not into the nude scenes and such–it is worth watching for the fact that it has plot, organization, innovation and originality.  Those of you anticipating Sons of Anarchy’s new season should tune in to this one in the meantime.  I think you’ll be pleasantly surprised.

I look for Hoon Lee, who plays “Job” on here to get a best supporting actor nod too.  Some people tune in to see what stunt he’s going to pull next! He has a lot of scenes in this series that will crack you up, so here is one of them (and it has adult language, so if you’re offended easily, sorry. This cracked me up!) :

As I dive further into the villain topic, I’m sure there are other categories to add later, but these are the main ones and these are meant for a general audience–not the academic one. If I were to go into the “Abrams Book of Literary Terms” it might bore a lot of you to death so I spared you that…However it is a good tool for writers to have on hand.  And a good resource to look at is Chuck Wendig’s “Terrible Minds” blog.  Here is a link to that too–and he’s as blunt as the Banshee writers!