This performance should have gotten Susan Peters more work and an Oscar nod…Unfortunately, those times were different. Maybe in the present she can get the respect she richly deserves.

This is probably one of the most important films in Oscar History–even though it never received a nod.  Susan Peters–who played the calculating, manipulative matriarch definitely should have received one.  There is only one performance that tops hers and that was that of Dame Judith Anderson in “Rebecca” years prior. 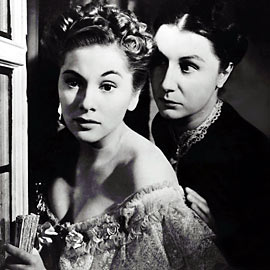 The performance of Dame Judith Anderson in the film “Rebecca” was also brilliant!

The  classic movie channels such as AMC or TCM show “The Sign of the Ram” very rarely.  They need to release it on dvd.  It never has been re-released–period! Not on VCR–nothing!  That is sad because the script writing was top-notch for the era and the acting was wonderful to watch.  The writers didn’t make the mistake of making this to where there was too much empathy for Leah St. Aubyn, that is for certain!  It definitely puts forth that there is a difference between disability and being “differently-abled” and it is tragic that the studios couldn’t see beyond Ms. Peters wheelchair to give her more work as they did for Lionel Barrymore when he became wheelchair bound.

I do realize that times were different, but I wanted to bring recognition to one of Hollywood’s “Lost Treasures”.  The Motion Picture Academy should give some sort of recognition to this film and to Ms. Peters.  For her to work after such an accident during those times should have at least gotten her some type of lifetime achievement award.  That would be nice to see, I think.

This script definitely left nothing out. It would be nice to see an updated version of this–not one with a lot of crap thrown in for adult ratings either–stick with the story as it was written–just update the dialogue and cast.  I think as far as the time period–it would be best to keep it in the 40’s or 50’s era due to the social issues brought up in the original film.  I would want Ben Cross for the part of Mallory, as he is an older gentleman married to the younger Leah–and I would make his character a bit more intimidating of Leah in the end once his suspicion of her is aroused…I don’t know who I’d want to play Leah though.  Christine would be another role that would be difficult for me to cast if I were the one behind this one…